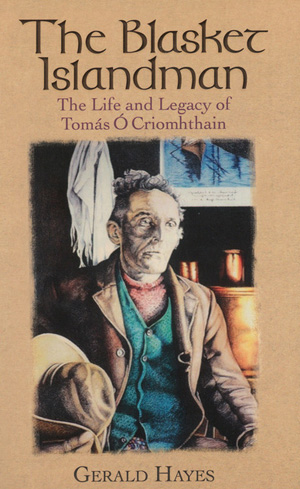 Springfield native and author Gerald Hayes will be the featured guest at the U.S. launch of his new book, The Blasket Islandman, on Saturday, October 13 at 12:00 pm at the Irish Cultural Center, 429 Morgan Road, West Springfield, MA. This event is free and open to the public. Lunch from the Irish House Restaurant and Trinity Pub will be available for purchase.

The Blasket Islandman tells the story of Tomás Ó Criomhthain, who spent his life on the Great Blasket (1856-1937) and helped put the island on the literary map. He was a fisherman and farmer who became fluent in reading and writing his native Irish, penning many essays printed in national Irish publications, along with two well-known Irish books: Island Cross-Talk: Pages from a Diary, first published in 1928, and The Islandman, first published in 1929. Ó Criomhthain ended his second book with the now well-known Irish phrase, “…the like of us will never be again.”

Hayes has co-authored two other books, both dealing with the small, once-inhabited island off the southwest coast of Ireland. In 2013, Hayes co-authored From the Great Blasket to America: The Last Memoir by an Islander with his later father-in-law, Michael Carney, a native Blasket Islander; and in 2015, The Last Blasket King with Eliza Kane. The Blasket Islandman is published by The Collins Press.

“[this] book will always remain an essential work of reference for not only the student and scholar of Blasket literature but for anybody concerned with the reality of life as lived at its barest and yet richest and most meaningful.” ~ Seán Ó Coileain, Emeritus Professor, University College Cork

“It’s great to have an overview of Tomás’ life and you put all the people he worked with into context.” ~ Ann Flower, granddaughter of Robin Flower, Ó Criomhthain’s friend, mentor and translator

Thanks to our Programming Sponsors