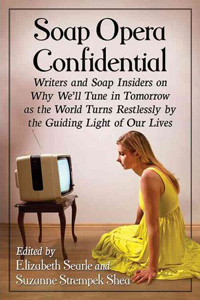 Please join us for readings from the essay collection Soap Opera Confidential: Writers and Soap Insiders on Why We’ll Tune in Tomorrow, As the World Turns Restlessly by the Guiding Light of Our Lives. Local authors Tommy Shea, Suzanne Strempek Shea, and Elizabeth Searle will read from the anthology on Saturday, October 7 from 1:00 – 2:00 pm at the Irish Cultural Center. Free and open to the public.

This special event features the book’s co-editors, Suzanne Strempek Shea (This Is Paradise) and Elizabeth Searle (We Got Him), essay contributor Tommy Shea (Dingers), and, by Skype from Co. Galway, essay contributor Nuala Ní Chonchúir (Miss Emily, Joyride to Jupiter).

Soap operas have captured loyal, often lifelong viewers since the first American daytime serial debuted in 1949. In this collection of 30 new and five classic essays and recollections, authors and soap opera insiders delve into the passion for television melodrama that compels viewers to tune in tomorrow. The contributors include iconic soap star Thorsten Kaye, journalist Leigh Montville, authors Elinor Lipman and Ann Hood, and editors of Soaps in Depth magazine. They explore the soap phenomenon from a range of perspectives and consider the appeal of a venerable genre in which, as novelist Jacquelyn Mitchard observes, “everyone’s life was more depressing than mine.” Copies of Soap Opera Confidential and other books by all four authors, will be available for sale before and after the presentation.

Suzanne Strempek Shea’s six novels and five works of nonfiction include This Is Paradise: An Irish Mother’s Grief, an African Village’s Plight and the Medical Clinic that Brought Fresh Hope to Both. She’s freelanced for publications including the Boston Globe, Yankee, the Irish Times, Down East, Golf World and ESPN the Magazine. A resident of Western MA, Suzanne teaches in the Stonecoast MFA program and is writer in residence at Bay Path University, and has led workshops throughout the USA and in Ireland. She directs Bay Path’s annual summer writing seminar in Dingle. www.suzannestrempekshea.com

Elizabeth Searle is the author of five books of fiction, including her 2016 novel We Got Him and her story collections Celebrities in Disgrace and My Body to You. Her theater work, Tonya & Nancy: The Rock Opera, drew national media and was produced in cities including Boston, Los Angeles and New York City. Her novel A Four Sided Bed is being adapted as a feature film. Elizabeth teaches at Stonecoast MFA and is a lifelong soap fan. She lives in Arlington, MA. www.elizabethsearle.net

Tommy Shea’s nearly 40 years at the Republican newspaper in Springfield, MA, included 20 years of writing a thrice-weekly column the Boston Globe said “chronicles little-noticed acts of kindness and grace perpetrated by everyday people.’’ In 2003, he received the New England Associated Press News Executive Award. In 2004, he was nominated for a Pulitzer Prize. His latest book, written with Joshua Shifrin, is Dingers: The 101 Most Memorable Home Runs in Baseball History (Skyhorse Press). www.tommysheastadium.com

Nuala Ní Chonchúir has published five short story collections, the most recent Joyride to Jupiter. A chapbook of short-short stories, Of Dublin and Other Fictions, appeared from Tower Press in the U.S. in 2013. Nuala’s critically acclaimed second novel, The Closet of Savage Mementos, appeared in 2014.  Her novel Miss Emily, which she researched at and set in Emily Dickinson’s home in Amherst, was longlisted for the 2016 M. M. Bennetts Award for Historical Fiction. She lives in East Galway, Ireland. www.nualanichonchuir.com