In the fall of last year, the Irish Cultural Center put out a call for photos and biographies of Irish-born veterans of the U.S. Armed Forces, to be displayed in a future photographic exhibit. The initial plan was to install this exhibit at the ICC in the spring of 2020. However, because of the public gathering restrictions this year, we made the decision to launch this mini-exhibit on our website. We are still hoping to create an in-person exhibit at the ICC in the near future, but we wanted to take this Veterans Day to debut our tribute to those veterans born in Ireland and who served their new country.

A new veteran’s bio and photo will be added each week. Thank you to all those who submitted photos and memories of their loved ones. We also thank the Mass Cultural Council for their support in developing this project. 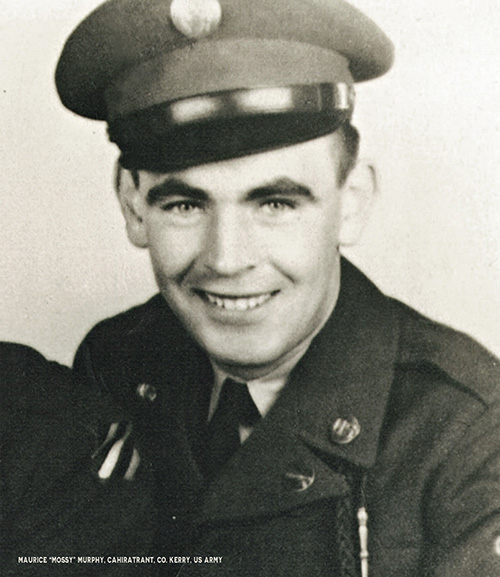 Maurice (Mossy) Murphy was born in Cahiratrant, Ventry, County Kerry, Ireland. He immigrated to Springfield, MA on June 13, 1948. He was drafted into the U.S. Army in December of 1948 and served at Fort Dix in NJ, Fort Campbell in Kentucky, and Fort Benning in Georgia. Upon being discharged he returned to Springfield. Once the Korean War started, he was drafted again and served in France and Germany. Mossy married Kathleen Doyle from Annascaul, County Kerry and they had five children: Margaret, Elizabeth, Tommy, John, and Dennis. Mossy proudly served the city of Springfield as a firefighter for twenty-six years. 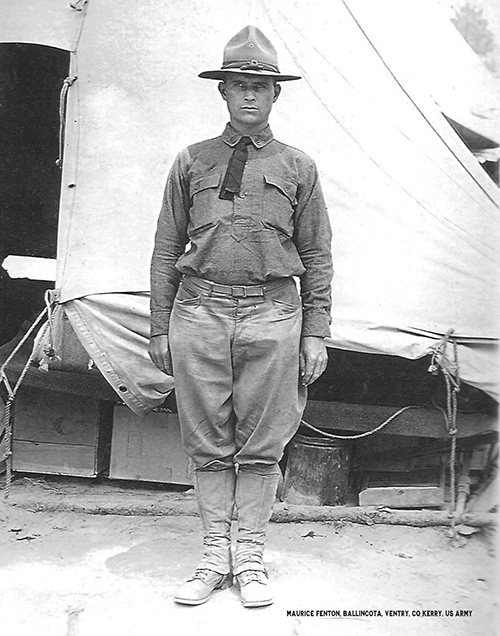 Maurice Fenton was born on September 17, 1886 in Ballincota, Ventry, County Kerry, Ireland, a son of Maurice and Margaret (Sears) Fenton. He arrived in the United States on April 26, 1906 to his sister, Mary, in Bondsville, MA. There he was employed in his first job as a stonecutter. He later moved to a rooming house in the north end of Springfield, became a U.S. Citizen, and got a job at the Springfield Armory working on the garon rifle. He was drafted into the U.S. Army and because of his knowledge of the rifle was sent to the front lines in France to repair the guns to be sent back to the soldiers. After the war ended, the first thing he did was go back home to see his mother. In 1925 he married Mary Lane of Mountbellew, Ballinasloe, County Galway at Sacred Heart Church in Holyoke. They settled in Springfield and had three children: John, Maurice, and Margaret. He passed away on November 1, 1967. He was always proud of his new country and his service in the U.S. Army. 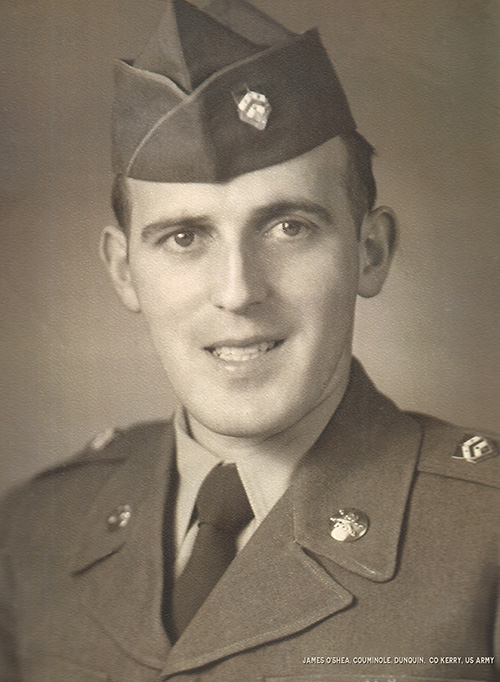 James (Jimmy) O’Shea was born in Couminole, Dunquin, Dingle, County Kerry, Ireland on December 17, 1928. He was the son of Michael and Joan Daly O’Shea. He immigrated to the United States in 1949 and served his country in the United States Army during the Korean War attaining the rank of corporal. He worked for the U.S. Postal Service for 32 years retiring in 1990. He was married to the former Elizabeth Williams from Cahirdargan, Dingle and they had five children; Elizabeth, John, Maureen, James, and Peggy. He passed away on April 22, 2012. 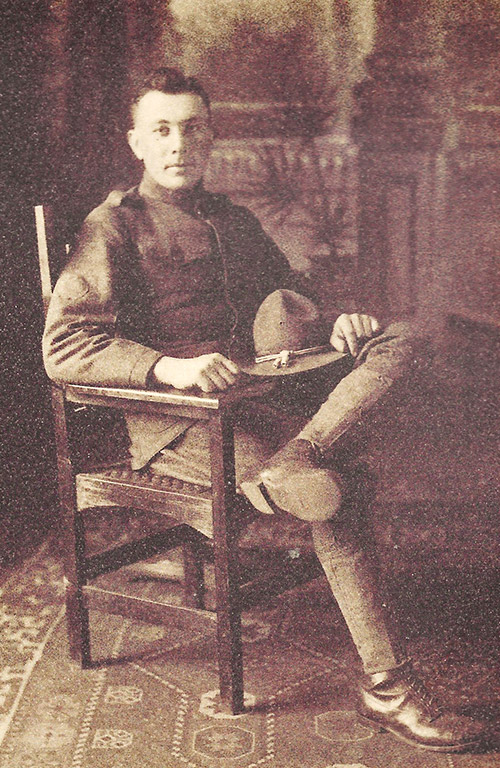 James J. O’Donoghue was born on December 30, 1894 in Glens, Dingle, County Kerry, Ireland. He arrived in Boston on the ship Franconia on May 7, 1913. He was eighteen and a half years old. He served in the U.S. Army. He married Elizabeth Fitzgerald of Moorstown, Dingle at Our Lady of Hope Church on October 16, 1923. Together they raised four children; Mary O’Donoghue Perry, Kathleen O’Donoghue Shea, Thomas F. O’Donoghue, and James J. O’Donoghue. 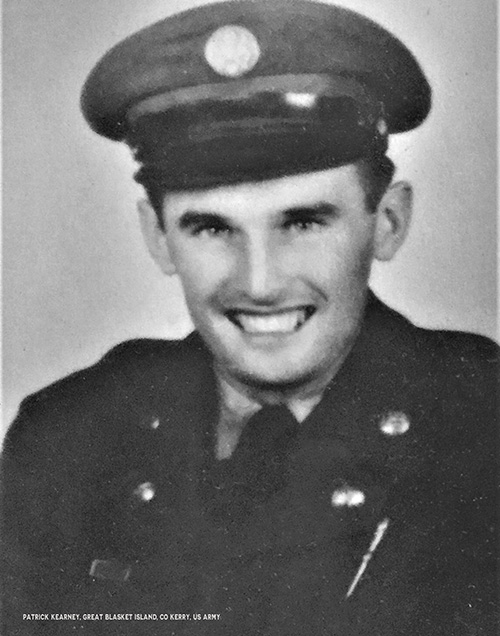 Patrick (Paddy) Kearney was born on January 25, 1924 on the Great Blasket Island. He was one of ten children born to Sean Tom Carney, a native of the island, and Neili Ni Dhalaigh (Nellie Daley) from Coumeenole. His siblings were; Cait, Sean, Seamus, Maurice, Mike, Martin, Maureen, Tom, and Billy. He arrived in the United States on June 25, 1948 sailing on the S/S Washington. He entered the U.S. Army sometime in the early 50s. Paddy passed away on January 24, 2001 and is buried in Gate of Heaven Cemetery in Springfield, MA. 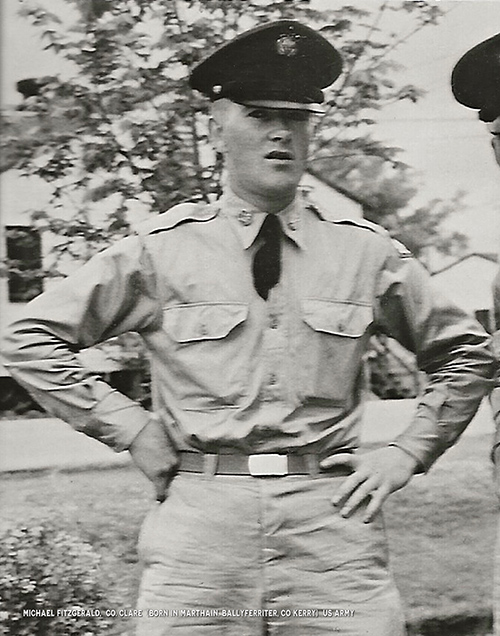 Micheal Mac Gearailt (Mike Fitzgerald), was born on February 22, 1938 in Marhain, Ballyferriter, Dingle, County Kerry, Ireland. He was the son of John P. Fitzgerald and Johannah Fenton Fitzgerald. He immigrated from Ireland in November of 1955 at the age of seventeen years old. He set sail from Cobh and arrived in New York where he was welcomed by his sister and brother-in-law, Mary and John Moriarty of Mooreland Street in Springfield’s Hungry Hill neighborhood. Mike volunteered for service in the armed forces of the United States Army on the 4th of September 1957. He spent the majority of his service time at the U.S. Army base in Munich and the U.S. Army garrison at Hohenfels, Germany. From there he visited his homeland on two occasions. Mike married Mary McGann of County Clare in Our Lady of Hope Church in Springfield on May 27, 1967. They returned to live in County Clare with their two children Sean and Katie in May of 1978. They had two more children in Ireland, Ciaran and Joan. Mike passed away on August 31, 2016. 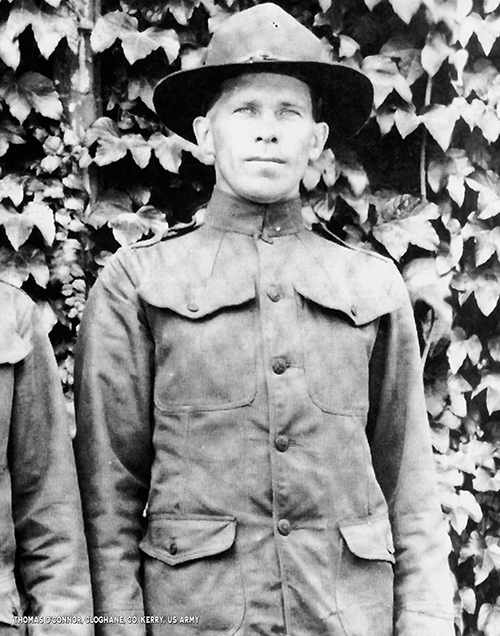 Thomas O’Connor was born in Cloghane, County Kerry, Ireland in 1889. He was the son of Dennis and Nora (Dean) O’Connor. During World War I, he was stationed at Fort Hamilton, NY, with the 38th Artillery. He was honorably discharged in December 1918. He married Breda Murphy of Ballydavid, County Kerry, and they had three children and nine grandchildren. He passed away in 1978. 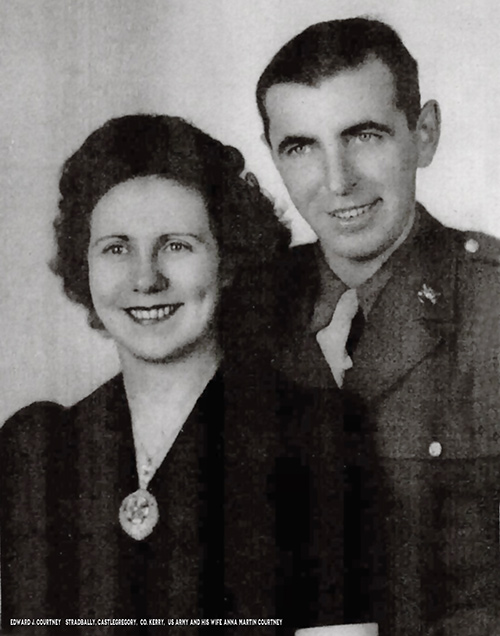 Edward Courtney was born in Stradbally, Castlegregory, County Kerry, Ireland. He was a son of Cornelius and Mary (Flaherty) Courtney. He served in the U.S. Army during World War II and was employed by the Holyoke YMCA. He was a member of the Layman’s Retreat League of the Passionist Monastery, the Holy Name Society of St. Jerome’s Church, and the John Boyle O’Reilly Club. He was married to Anna Martin.

Daniel J. Connor was born in New Market, County Cork, Ireland on February 4, 1893, a son of James and Margaret (Curtin) O’Connor. He immigrated to the United States at 18 years of age and settled in Amherst. He received a degree in Floriculture from the Massachusetts Agricultural College in 1916. He married Mary J. Walker in 1917 in Holy Rosary Church in Holyoke. He enlisted in the Army in 1918 and was naturalized in Virginia in October of 1918. After the war he went to work at Mount Holyoke College. He retired as head of the greenhouse at the college. Daniel was a prize winning florist over many years and was recognized throughout the Valley as an outstanding and gifted flower grower. He was the father of Walker of Rockport, NY; Eileen of Hamilton, OH; and Dorothea Barry of South Hadley. 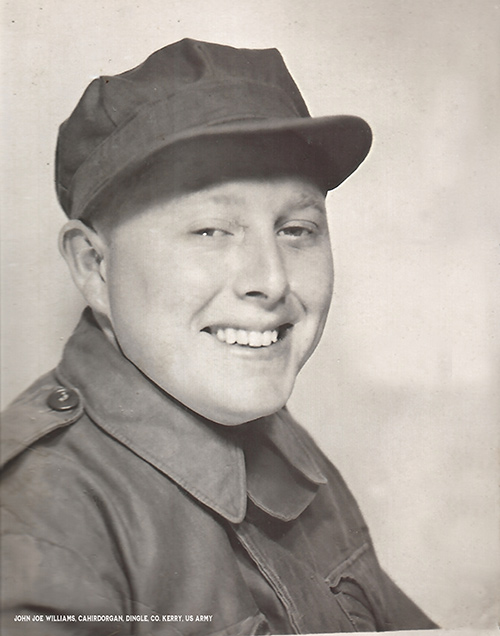 John Joe Williams was born in Cahirdargan, Dingle, County Kerry, Ireland on December 14, 1929. He was the son of Elizabeth Martin from Camp and Francis Williams. He immigrated to the United States in 1949 and served his country in the U.S. Army during the Korean War attaining the rank of Sergeant. He was employed at Diamond Match for 29 years and then worked as a crossing guard for the Springfield Public School System. He married Margaret O’Connor and had one son, John F. Williams. He passed away on January 26, 2013. 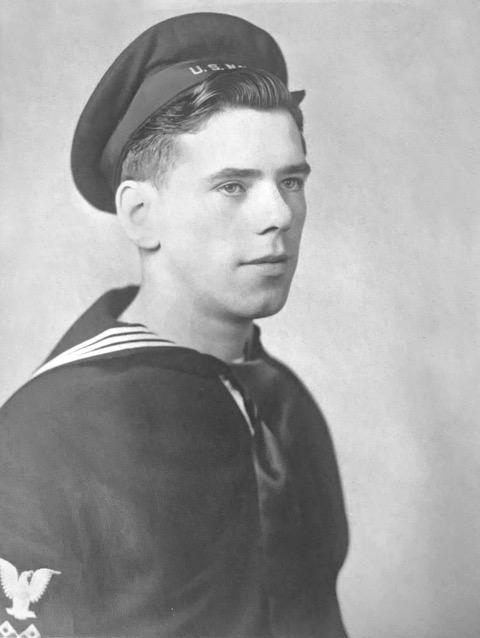 Finian Michael O’Shea was born to Michael Shea and Nora McCarthy Shea on February 10, 1925 in Cloghanecarhan, Aghatubrid, Cahirciveen, County Kerry.  Along with his parents and siblings, he settled in Chicopee, Massachusetts in 1930. He enlisted in the U.S. Navy and served during World War II in the European-North African theater as a minesweeper and signalman. After his return, he worked at General Electric until on St. Patrick’s Day 1953 he was appointed to the Chicopee Police Force under the watchful eye of his uncle, Finian Shea, then a patrolman on the Chicopee Police Force. He worked in various capacities until his retirement as Lieutenant Detective in 1980. In 1951, he married Noreen Curran whose parents immigrated to Springfield from West Kerry. Together they had five children:  Kevin, Daniel, Andrew, Brian, and Mary.  Finian died in December 2001 shortly after celebrating his 50th wedding anniversary. 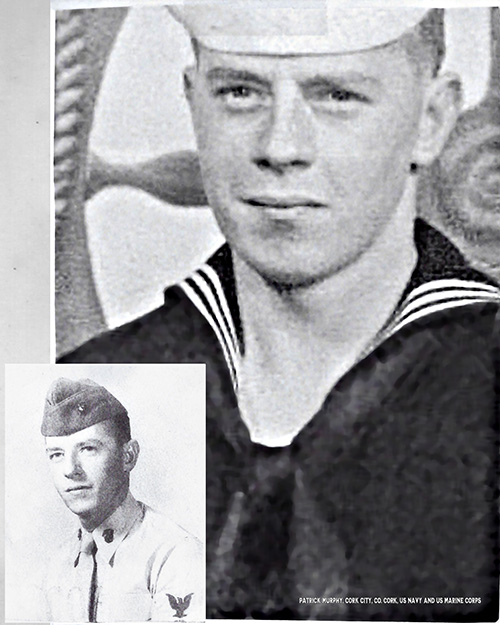 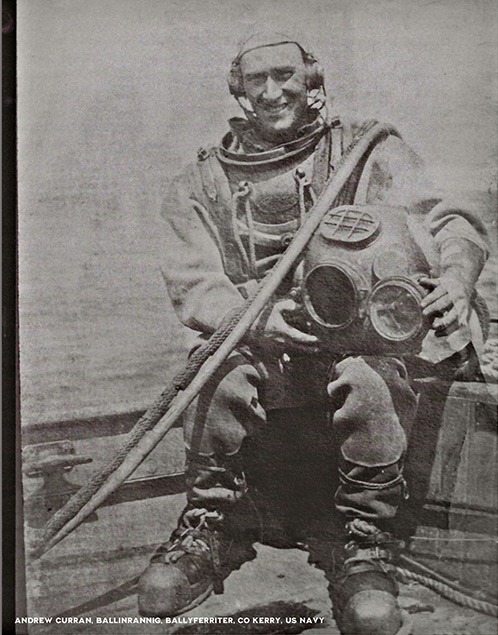 Andrew Curran was born on July 3, 1893 in Ballinrannig, Ballyferriter, Dingle, County Kerry, Ireland. He was the son of Hugh Curran and Ann Houlihan. He immigrated to the United States on the SS Megantic that sailed out of Liverpool on April 21, 1915 and arrived in New York on April 30. He served as a Navy Seal on the underwater demo team during World War I. He married Catherine Boland on June 12, 1923. Andrew was a Springfield police officer who had the walking beat around Bottle Park in Springfield’s Hungry Hill neighborhood. He passed away on August 1, 1979 at the Holyoke Soldiers’ Home. 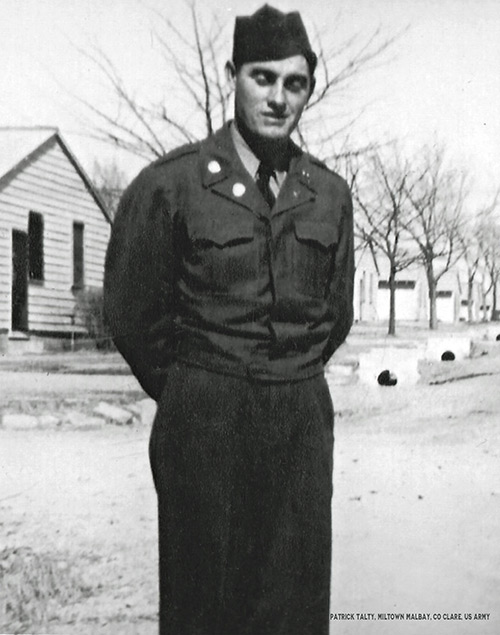 Pat Talty was born in Miltown Malbay, County Clare, Ireland on March 12, 1928. He was a son of Patrick Talty and Ellen McMahon. He immigrated to Springfield, MA in 1948. He was inducted into the U.S. Army on December 7, 1950 and transferred to the Army Reserve on September 16, 1952. He was awarded the Korean Service Medal with two Bronze Stars, United Nations Service Medal, and Combat Infantry Badge. He married Mary Margaret (Peggy) Keith on May 14, 1955 at Holy Name Church in Springfield, MA. They had four children: Bill, Ellen, Mary, and Kathleen. 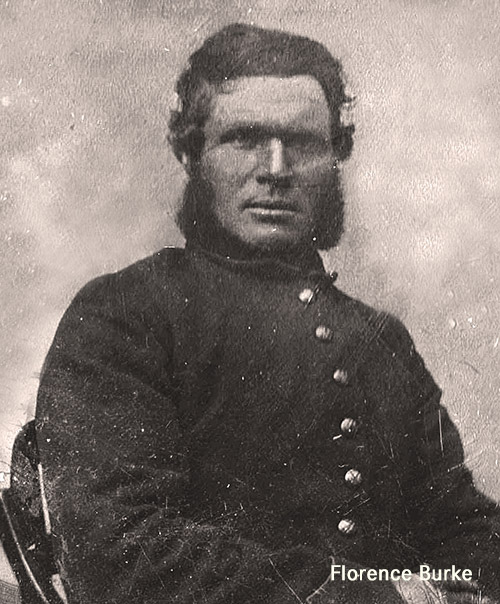 Florence Burke was born in Schull, County Cork, Ireland in 1829. He immigrated to West Springfield in 1848 with his brother. Florence was nineteen years old at the time. He married Ellen Daly and had three children. In 1864 he enlisted as a “substitute” in the Civil War for Julius Day, who had been conscripted, in exchange for $300 and a parcel of his land. He fought in Virginia as a private in the 37th Regiment before dying in the Battle of Petersburg on June 19, 1864. Florence Burke has been part of an Irish Famine exhibit in Dublin, Ireland for the past three years. His letters were donated to the Burns Library at Boston College in 2018. 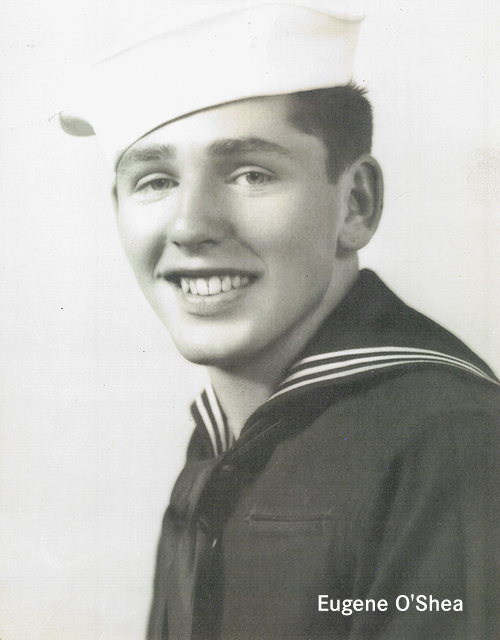 Eugene Patrick O’Shea was born to Michael Shea and Nora McCarthy on January 7, 1924 in Cloghanecarhan, Aughutbrid, Caherciveen, County Kerry. He arrived in Chicopee, MA about 1930 with his parents and siblings.

When he started school at St. Patrick’s in Chicopee, like many of the Irish, his family dropped the letter “O” in their surname. Up until the time he joined the Navy, his last name was Shea. On his eighteenth birthday, one month after Pearl Harbor, he and his friend, Charlie Burnham, enlisted in the Navy. The recruiter, looking at Gene’s birth certificate, stated, “Your name is O’Shea, not Shea.” From that day forward it was O’Shea.

He was stationed on the USS Anne Arundel and USS Zircon. When he left the Navy in late 1945, he started work at General Electric in Holyoke. When the GE plant was winding down and moving to Pittsfield, he took the civil service exam and was hired as a firefighter for the city of Chicopee in 1957 and retired in 1988.

He married Cecilia Dowd from the Hungry Hill section of Springfield, whose parents hailed from Castlemaine, County Kerry. Together they had five children: Noreen, Timothy, Mary, Patrick and Eugene. Gene passed away at the age of ninety on March 15, 2014. 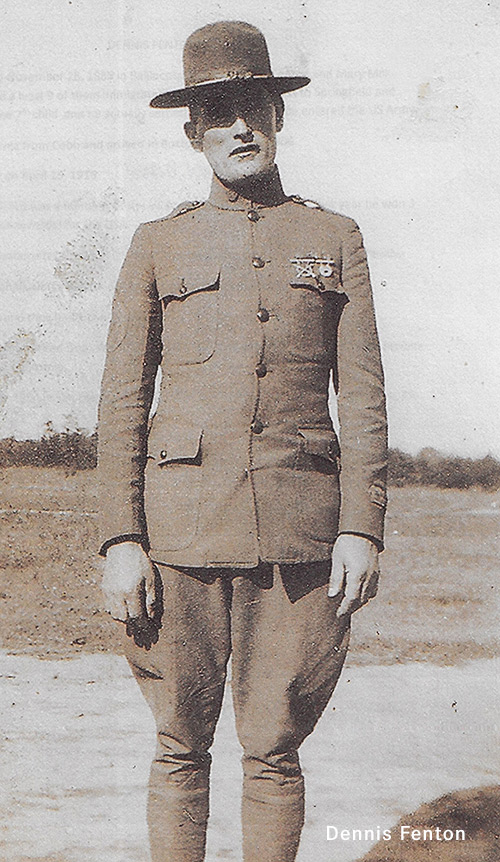 Dennis Fenton was born on November 28, 1886 in Ballincota, Ventry, Co Kerry, Ireland. He immigrated to the United States on April 12, 1906, settling in Fitchburg, MA. Three of his brothers, Maurice, Michael, and John settled in Springfield, MA. He entered the United States Army on April 25, 1916.

In the 1920 Olympics, Dennis was a member of the U.S. Army sharpshooter team. That year, he won three Gold Medals and one Bronze for the United States. In the 1924 Olympics he won a Bronze medal as a sharpshooter.

He passed away on March 29, 1954 and is buried in the FT Rosecrans National Cemetery in CA.