“Winter ends on March 20, 2021, and the biggest rite of passage into spring is marked in Western New England by the Holyoke Parade,” Cahillane said.

“Holyoke parade season is a glorious time of the year which will be greatly missed. Also, the parade has a significant economic and cultural impact, and is simply a load of fun,” he added.

Cahillane gave credit to the many hard-working volunteers who work tirelessly to organize and execute events including the parade, the road race, and other dinners and celebrations. He lauded their ongoing commitment to making each year’s celebrations a success.

“We know how dedicated and enthusiastic the Holyoke Parade Committee and all the surrounding city and town parade committees are. All the involved hard-working volunteers are incredible. They all work diligently the whole year, let’s recognize these promoters of all things Irish for their commitment.”

Holyoke Parade Committee President, Marc Joyce agreed, stating, “We will march again, and we will have much to celebrate over homecoming weekend in 2022.”

Stephanie Joyce, who serves as the Chair of the Board of Directors for the St. Patrick’s Committee of Holyoke, as well as the Treasurer of the Irish Cultural Center, added:

“It is unfortunate that we had to cancel the parade and road race and we know that everyone in the region is disappointed. Our committee of 200-plus volunteers work tirelessly year-round to plan and execute these events, but the safety of our participants, viewers and public safety workers is our number one priority. St. Patrick’s weekend brings such an economic boost to the local economy I would encourage everyone to support the local businesses that are most impacted by this decision. We look forward to 2022 when we can all march again.” 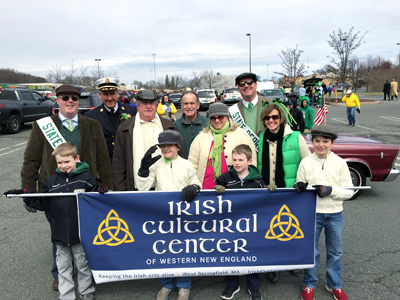