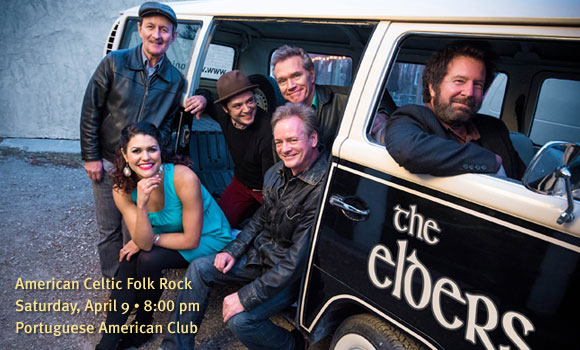 Back by popular demand! The Irish Cultural Center invites you to an evening with The Elders, one of the most critically acclaimed American Celtic folk rock groups touring today, as they return to western MA.

Tickets are available online, or by calling the ICC at 413-265-2537. Don’t miss this opportunity to see The Elders in a rare return to the Pioneer Valley – get your tickets today. A cash bar will be open, and there’s plenty of parking at the Club.

They have performed across the United States, Ireland, and Europe, drawing faithful crowds and earning new fans wherever they go. They first played for the ICC last fall to a full house, creating new fans from a very enthusiastic crowd. We heard several comments from people that it was the best show they had ever seen. *Note: phone orders will end on April 7, and online ordering will close at 9:00 am on April 9.*

Watch videos, listen to tracks and learn more about The Elders.  See what the critics say.

About The Elders
Since forming in 1998 in Kansas City, The Elders have set the music scene on its ear, thanks to a skillful blend of American roots rock and amped-up Celtic folk; a cross-pollination of elements that is high-octane and progressive, yet rooted in tradition.

Employing a variety of instruments including guitars, drums, banjo, accordion, mandolin, piano and fiddle, these six artists collectively create music that transcends the stereotypical notion of Celtic music. Powerful four part harmonies, blazing instrumentals and song writing that is unaffected by fads, trends and the giant maw of mind-numbing commercialism.

Their songs are mystical, comical, political and cultural, while covering a wide variety of topics such as poverty, civil war, family bonds, spirituality, love and friendship. They tell us stories of people, places and events – some recent, some distant, some real and some imagined.

Thanks to our Sponsors: