Stephanie Joyce Named to ICC Board of Directors 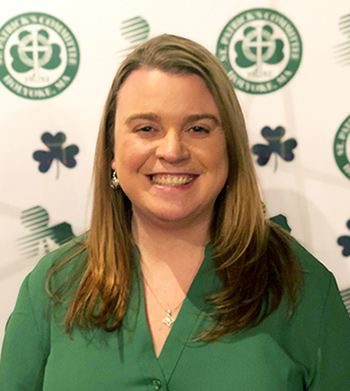 Holyoke resident Stephanie C. Joyce has been appointed to a seat on the Board of Directors of the Irish Cultural Center of Western New England.

Joyce was born and raised in Holyoke and is the daughter of Cindy and Marc Joyce, both lifelong Holyoke residents. After living in the Hungry Hill neighborhood of Springfield for 10 years, she recently moved back to Holyoke, where she is active in numerous community groups, including the St. Patrick’s Parade Committee of Holyoke and Storming the Green, Inc., among other community volunteer work.

She is currently a Tax Examiner for the Massachusetts Department of Revenue and previously held several management positions at the Log Cabin Banquet and Meeting House and the Delaney House Restaurant.

ICC President Sean F. Cahillane welcomed Joyce to the board that oversees all aspects of the organization, now in its 21st year.

“Stephanie Joyce has the kind of dedication and energy that we love at the Irish Cultural Center,” Cahillane said. “She has already made a big difference for us and we look forward to working with her in the future.”

Her appointment to the board was made by the St. Patrick’s Parade Committee of Holyoke, one of four sister organizations that are a part of the ICC.

Joyce was raised in an Irish American household where pride in heritage was instilled and celebrated. She is currently serving her third year as Chair of the Board of Directors for The Parade Committee, where her father serves as President.

“Growing up in Holyoke, the parade and has always been a big part of my life and family traditions, with my father being a member for over 40 years,” she said.

“I’ve been fortunate enough to travel to Ireland to visit my family in Kerry multiple times, including several weddings, which my uncle Monsignor David Joyce has performed,” she added.

In her capacity as a member of the ICC board, Joyce is also serving as co-chair of its Pub and Restaurant Committee, which oversees the Irish House Restaurant and Trinity Pub. She has also organized celebrity bartender events, and has worked to help plan the Lúnasa Festival and Feis.

In addition to her work with the ICC and the Parade Committee, Joyce co-chairs an annual golf tournament in honor of her late friend, Heather McMahon. In just 3 years that effort has resulted in donations of over $160,000 to a fund created in her honor at Dana Farber, for glioblastoma research.